MENU
Home > Research > Summary of Results and Methods
Down the Drain

Down the Drain: Summary of Results and Methods

The table below summarizes the results of analyses conducted by Environmental Working Group (EWG) and East Bay Municipal Utility District (EBMUD) scientists on wastewater from residential, commercial, and manufacturing sites in the San Francisco Bay Area. We measured levels of 3 widely-used hormone disruptors, phthalates, bisphenol A, and triclosan, in 19 samples. Locations included homes, a nail salon, laundries, a pet wash, medical and veterinary centers, manufacturing facilities, and an EBMUD facility discharging treated wastewater to the Bay. 18 of 19 water samples examined contained at least 1 of these 3 substances; 2 samples contained all 3 substances.


Hormone-disrupting substances were detected in wastewater samples from homes, businesses, and industrial sites.
(measurements in parts per billion)

The analysis of chemical contaminants entering San Francisco Bay from residential, commercial, and industrial wastewater streams was a collaboration between EWG and EBMUD.

We collected a total of 21 samples of wastewater during 3 rounds of sampling, taking place in August, September, and November, 2006, before major winter rainfall to avoid dilution by stormwater. Samples were drawn from a residential area (2 samples); a variety of commercial locations, including a nail salon, 2 industrial laundry facilities, a residential coin laundry, a diaper service, a pet wash, a veterinary clinic, a hospital, an outpatient medical clinic, and sites manufacturing pharmaceuticals, plastic bags, paper products, beverages, and adhesives; and water entering (2 samples) and exiting (3 samples) the EBMUD wastewater treatment plant before discharge into the Bay. Information on samples of water entering the wastewater treatment plant is not reported here.

Hormone-disrupting chemicals were detected in wastewater
throughout the region. 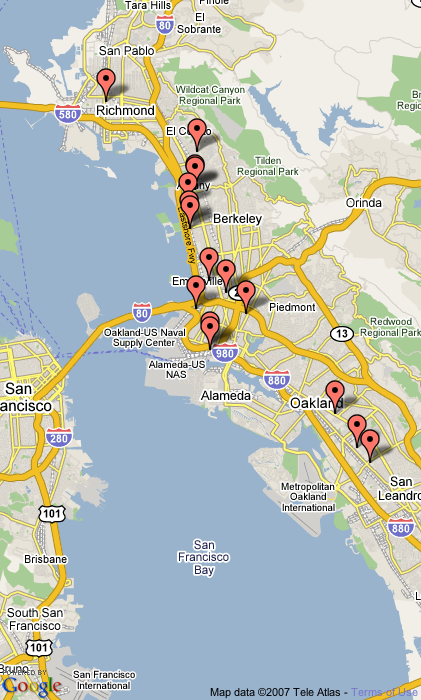 Samples were analyzed by the EBMUD analytical laboratory, as well as by MWH Laboratories (www.mwhlabs.com; Monrovia, CA), for a number of chemicals that are linked to disruption of the endocrine (or hormone) system. Well-established analytical methods were used to measure contaminants; the tests are known as EPA 625 and USGS 0–1433–01. These tests provide measurements for several pollutants; we report on a small fraction of the chemicals detected, specifically, those linked to disruption of hormone systems and found in common consumer products.

These include include several phthalates, used in fragrances, nail polish, adhesives, inks, pill coatings, and flexible plastics like PVC; bisphenol A, used in polycarbonate plastic, dental fillings, and to make a substance that lines the insides of food and beverage cans; and triclosan, an antimicrobial agent used in personal care products and numerous other products labeled "antimicrobial," from plastic cutting boards to shoe insoles. The phthalate chemicals mentioned in this report include diethyl phthalate (DEP), di-n-butyl phthalate (DBP), butylbenzyl phthlalate (BBzP), di(2-ethylhexyl) phthalate (DEHP, also known as bis(2-ethylhexyl) phthalate), and di-n-octyl phthalate (DOP).

The analytical methods used were designed to detect trace amounts of contamination in natural waters, as opposed to the broader range of contamination expected in wastewater. As a result, some of the measurements obtained are considered estimates, because the concentrations of particular contaminants present in some of the wastewater samples were much higher than the standards used to calibrate the analytical techniques. Estimated measurements are marked with an asterisk.

A complete summary of the data obtained, including measurements of dozens of other chemicals obtained using the EPA and USGS methods, and analyses of wastewater samples flowing into the EBMUD wastewater treatment plant, is available.

Other chemicals detected in one or more wastewater sample include:

‹ What You Can Do References ›