In November 2013, EPA proposed reducing the Renewable Volume Obligations (RVOs) required by the Renewable Fuel Standard for both advanced biofuels and conventional corn ethanol. The proposal would cut the corn ethanol mandate from 14.4 billion to 13.01 billion gallons, and the advanced biofuels mandate from 3.75 billion to 2.2 billion gallons. The agency based its decision in part on the limited availability of advanced fuels. Production of cellulosic and other advanced fuels has fallen short of statutory volumes every year since the standard was implemented. In addition, the drop in gasoline demand that developed in 2013 meant that requiring larger amounts of corn ethanol would force gasoline refiners to exceed the so-called “E10 blend wall” that limits ethanol content to 10 percent of the fuel volume. 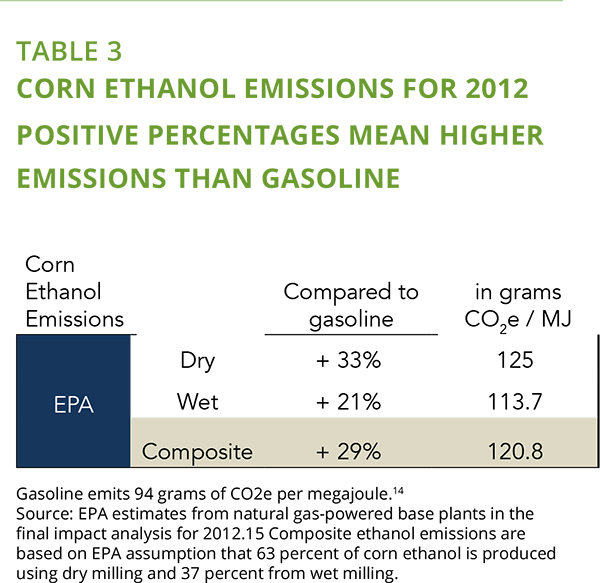 EPA’s Regulatory Impact Analysis estimated that corn ethanol’s greenhouse gas emissions for the year 2012 would be 33 percent higher than gasoline’s with dry distiller’s grains, and 21 percent higher with wet distiller’s grains. EWG determined a composite estimate based on EPA’s assumption that 63 percent of corn ethanol is produced using dry milling and 37 percent from wet milling (Table 3). EPA’s numbers are expressed both in terms of performance compared to gasoline and also in grams of CO2 equivalent emissions per the amount of energy produced (expressed in megajoules).

Using EPA’s emissions estimates in Table 3, EWG compared the anticipated greenhouse gas emissions from the statutory corn ethanol mandate with the reduced volumes proposed in November 2013. We assumed that an energy-equivalent amount of gasoline would replace the lower volume of corn ethanol. The analysis shows that emissions would drop because of corn ethanol’s greater emissions. The proposed cut of 1.39 billion gallons in the corn ethanol mandate would reduce emissions by 3 million metric tons of CO2 equivalent (see Figure 2) – as much as taking more than 580,000 cars off the road for a year.16 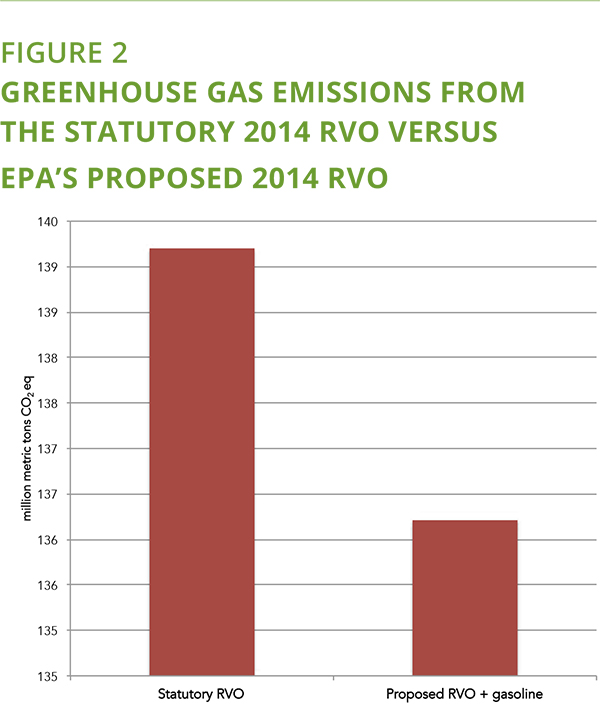