In March 2013, the Biotechnology Industry Organization (known as BIO), the trade organization that represents biofuels manufacturers, published a study concluding that, contrary to EPA’s findings, corn ethanol’s emissions in 2012 were 31 percent lower than gasoline’s.17 The EPA had found that corn ethanol’s emissions were 29 percent higher than gasoline’s (Table 4). The BIO study also claimed that lowering the corn ethanol mandate would increase greenhouse gas emissions. However, a close examination shows that the BIO study greatly underestimated emissions from land use change because it used a model developed at Argonne National Laboratory, called GREET (Greenhouse Gases, Regulated Emissions, and Energy Use in Transportation) that relies on unrealistic assumptions. 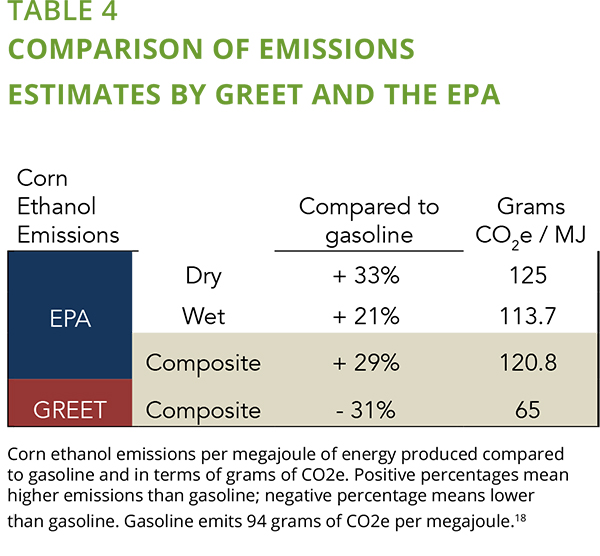 The BIO study cited a paper by Michael Wang of Argonne National Laboratory and colleagues, published in December 2012 in Environmental Research Letters, that came up with an estimate of emissions from land-use change that is less than half of the low end of published ranges,19 and about a third of EPA’s estimate. Figure 3 compares Wang’s estimates with those arrived of the EPA; Tim Searchinger, a research scholar at Princeton University; and the California Air Resources Board, which sets California’s low-carbon fuel standard. Using an economic model called GTAP (Global Trade Analysis Project), developed at Purdue University, Wang and colleagues estimated land-use change emissions at just 9 grams of CO2e per megajoule of energy which is much smaller than the 34 grams of CO2e per megajoule estimated by the EPA. Results published by Wang and colleagues in 2012 are referenced in this report as the GREET model, but Wang and colleagues' results rely on GTAP to determine land use change emissions.

The GREET model underestimated land-use change emissions because it made several erroneous assumptions. It assumed that the increased demand for corn driven by the renewable fuels mandate would be met largely by increasing the yield of existing croplands, not by putting uncultivated land into production. Additionally, GREET’s estimate did not account for the higher water requirements of increased crop yields. 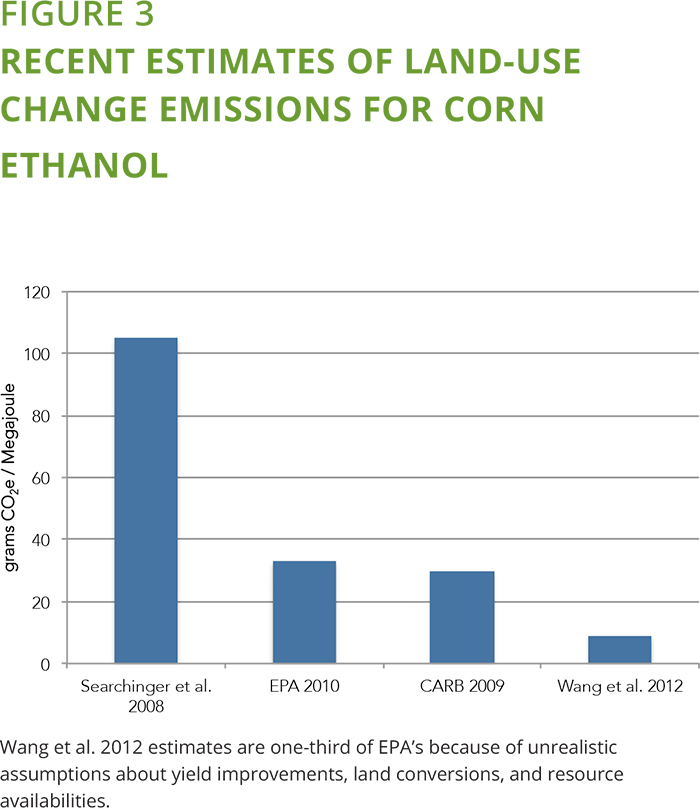 Lobell also showed that yield elasticity is dependent on context. Yields may be easier to improve on underperforming farms but difficult to increase on already high-yielding operations. In addition, crop yields are typically limited by inputs such as fertilizer and water, which together explain 60-to-80 percent of global yield variability.22 Many studies have found that increasing these inputs results in diminishing marginal returns, especially on croplands with high yields. In other words, for every additional unit of input such as fertilizer, the yield improvement gets smaller and smaller.23,24 Farms at or near the “yield ceiling” will likely achieve less yield improvement per input than underperforming farms because it is uneconomical for farmers to keep adding more and more inputs for smaller and smaller returns. The GTAP model used with GREET by Wang and colleagues assumes the same high rate of yield elasticity across all farms and ignores yield ceilings and diminishing marginal returns.

In a regional analysis, the Lobell study estimated that yield elasticity in developed countries is much lower (0.14 for corn)25 than the 0.25 value used by GREET, which overestimates yield improvements and underestimates the land required to meet crop demands.

Moreover, both the GREET and EPA calculations ignore water constraints. A 2013 analysis by agricultural economists Farzad Taheripour, Thomas Hertel and Jing Liu (Hertel was one of the developers of the GTAP model) at Purdue University also found that ignoring water constraints underestimates emissions from land-use change by 28 percent. Although irrigated croplands have much higher yields than those that rely only on rainwater, irrigation is limited in some regions by water scarcity and lack of infrastructure. The Taheripour study found that when water constraints were included in the GTAP analysis, the estimated emissions from land use change rose by 28 percent (from 35.6 grams CO2e/MJ to 45.4 grams CO2e/MJ).26

Accounting for resource constraints on corn production – which the GREET model ignored – is essential to get an accurate estimate of the emissions from land use change.