Glacier Water Services is the largest owner-operator of drinking water vending machines in California and the U.S.

Glacier Water Services is the largest owner-operator of drinking water vending machines in California and the U.S.

View and Download the report here: Is Water From Vending Machines Really “Chemical-Free”?

Glacier Water Services, the largest owner-operator of drinking water vending machines in California and the U.S., claims its machines sell “safe, chemical-free water.” But statewide testing found that a third of Glacier machines sold water that failed to meet state standards for a class of chemicals linked to increased risk of cancer and birth defects. 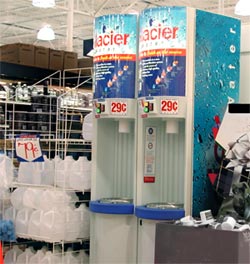 For paying 100 times the price of tap water, vended water consumers are supposed to get drinking water that is essentially free of trihalomethanes (THMs), the chemical byproducts of treating water with chlorine. Glacier claims to reduce contaminants in tap water by approximately 97 percent, but two-thirds of the machines tested failed to remove that level of THMs.

The state has known about Glacier’s failure to meet THM standards for years but has taken no meaningful action. Glacier has promised to improve its machines’ performance, but these tests show it has not. To ensure that consumers get what they pay for, California must establish an industry-financed program of mandatory unannounced inspections of all water machines, with rigorously enforced penalties for failure to meet health standards.