Under Proposed Rocket Fuel Standards, Many Women Would Need Treatment To Protect Baby

Under Proposed Rocket Fuel Standards, Many Women Would Need Treatment To Protect Baby

A recent study by the Centers for Disease Control and Prevention (CDC) found that more than one third of American women are deficient in iodine, and that for these women, exposure to the rocket fuel contaminant perchlorate in food or water can cause a significant and dose dependent decline in thyroid hormone levels. Low thyroid levels, or subclinical hypothyroidism, is an established risk factor in fetal development and can cause IQ deficits, developmental delays, and in severe cases, cretinism.

An Environmental Working Group analysis of the CDC data found that for more than 2 million iodine deficient women nationwide, exposure to perchlorate in drinking water and the food supply, at levels equal to or lower than proposed national and state standards, could lower thyroid hormone levels to the extent that they would require medical treatment to avoid developmental damage to their babies. 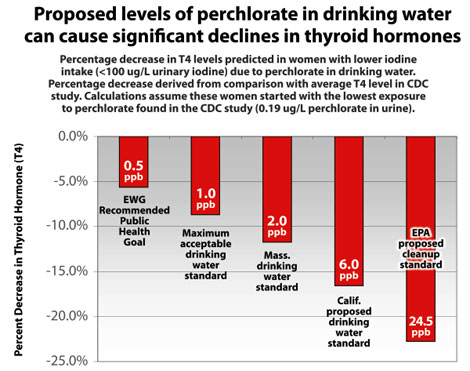 California's proposed limit for the chemical, perchlorate, could depress thyroid hormone levels in more than 272,000 California women of childbearing age to the extent that they would require medical treatment to protect their babies from IQ deficits and abnormal development. New Jersey's proposed limit could cause such deficiency in 65,000 women in that state.

If applied nationwide, the California proposal would trigger thyroid deficiency requiring treatment during pregnancy in more than 2.2 million women of childbearing age. But the federal government's waste-site cleanup standard for the chemical is more than four times weaker than the California drinking water proposal, extending the risk to millions of additional women and their babies.

EWG's findings show clearly that the perchlorate cleanup standard adopted by the U.S. Environmental Protection Agency, and the safety standards for perchlorate in drinking water under consideration in California and New Jersey, are inadequate to protect the 22 million American women of childbearing age who don't get enough iodine in their diet. Even the stricter drinking water standard already adopted by Massachusetts would cause a decline in women's thyroid levels.

In September 2006, a startling study from the U.S. Centers for Disease Control (CDC) found that in the 36 percent of U.S. women with low iodine intake, almost any amount of perchlorate exposure was linked to a significant change in levels of thyroid hormones. [1] For about 1 in 10 of these women, if they were exposed to 5 parts per billion of perchlorate in drinking water, the resulting hormone disruption would require treatment for sub-clinical hypothyroidism, according to a consensus of clinical endrocinologists. [2]

Perchlorate, the explosive ingredient in solid rocket fuel, has leaked from military bases and defense and aerospace contractors' plants in at least 22 states, contaminating drinking water for millions of Americans. The chemical has also been found widely in supermarket milk, produce and many other foods and plants; in a separate study, the CDC found it in the urine of every person tested. [3 &em; 12] As small changes in thyroid hormone levels during pregnancy &em; even within the normal range &em; are associated with decreased intellectual and learning capacity in childhood, the extensive reach of perchlorate contamination has huge implications for public health. [13, 14]

The CDC's studies are the first major epidemiological research into the potential health impacts of chronic perchlorate exposure. Researchers found a statistically significant, dose-dependent association between perchlorate exposure and changes in thyroid hormone levels in all women in the study.

The effects on thyroid hormones were particularly pronounced in women with lower iodine intake. Among these women, a urinary perchlorate level of only 5 parts per billion was associated with a 16 percent change in thyroid hormone levels, compared to the median level found in the study. The authors noted that 36 percent of U.S. women have iodine intakes in the range identified as "lower" in the study.

The findings were consistent with how we understand hormones to be regulated in the human body, and how we understand perchlorate to exert its toxic effects. [1] But most important are its implications for the drinking water standards and cleanup standards proposed or adopted by several states and the U.S. Environmental Protection Agency.

Under pressure from the Pentagon and the defense industry, EPA has delayed setting a drinking water standard for perchlorate. But in January, after a controversial National Academy of Sciences study &em; since strongly criticized by a federal advisory panel on children's health &em; the EPA adopted a standard for cleanup of perchlorate-contaminated waste sites of 24.5 parts per billion. [15, 16]

The CDC data show that perchlorate exposure at just 5 ppb will cause significant disruptions in thyroid hormone levels for women who have lower iodine intake. This will translate into significant risks to unborn babies, infants and children, with a very real potential for significant developmental delays and learning deficits in the exposed population.

Applying the results of the CDC study to the California population, EWG estimates that at exposure to 5 ppb of perchlorate in drinking water, 1 in 10 California women of childbearing age with low iodine intake would be diagnosed as sub-clinically hypothyroid. This equals about 272,000 women in California whose exposure to perchlorate in tap water could necessitate treatment during pregnancy for subclinical hypothyroidism, a condition known to increase the risks of long term neurological damage and developmental delays. [2, 17]

It is reckless to adopt a drinking water standard for perchlorate that is such a risk to women and their unborn babies that mothers would need prescription medicine to counteract the threat. And the CDC didn't even look at the impact of perchlorate exposure on infants, children and other adults already suffering from thyroid deficiency.