Trouble in The Air

The U.S. Senate's latest scheme to limit the liability of asbestos makers would cut benefits dramatically to people dying of the fatal asbestos cancer, mesothelioma, and pre-empt laws in 12 states, and court customs in at least 8 more, that guarantee a speedy trial to terminally ill plaintiffs. Younger victims, who are more likely to have dependent children, huge medical bills, and substantial wage loss are hit hardest by the cuts in compensation. Everyone dying of mesothelioma, some 2,500 people in 2002, would have their cases thrown out of court and be forced to wait for nine months before they could restart their cases or file a claim with the national asbestos trust. Many hundreds of these people would die waiting.

This harsh treatment of the people most brutally harmed by asbestos is critical to the financial solvency of the proposed $140 billion national asbestos trust fund. If mesothelioma victims were helped at the average level awarded through the current system of litigation and trusts, $2.2 million, taking care of mesothelioma victims alone would bankrupt the proposed $140 billion national asbestos trust fund, leaving no money to help the hundreds of thousands of additional people who will die of other asbestos cancers, or from the debilitating and often fatal asbestosis.

As the Senate moves to consider this legislation, a new EWG Action Fund analysis of the most recent available data from the Centers for Disease Control and Prevention shows that deaths from asbestos are increasing, as predicted in the March 2004 Action Fund report, Asbestos: Think Again. 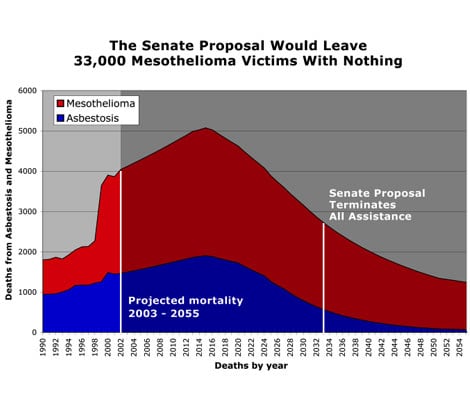 Asbestos will claim thousands of American lives annually for at least another 50 years. EWG Action Fund estimates about 113,000 mesothelioma deaths over the next five decades, and a greater number from lung cancer during that time. The Senate bill, which terminates the asbestos trust fund in 28 years (2033), will strand an estimated 33,000 people who will be diagnosed with fatal mesothelioma after that date, with no trust fund resources to aid them.

Tens of thousands more asbestos lung cancer victims will also be denied any help because they, too, will be diagnosed with their fatal disease after the date when the proposed trust fund will expire. Thousands of additional victims of serious non-cancer disease will be similarly denied assistance.

Trouble in The Air